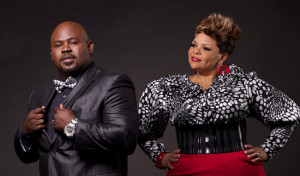 BET (Black Entertainment Television) has announced that David and Tamela Mann will be one of three new reality shows to debut fall of 2014 to 2015.

The Mann’s reality show tentatively titled ‘Meet The Manns’ will give viewers a behind-the-scenes look at the multifaceted lives of these successful entertainers, as they strive to strike the perfect chord between career, family and love.

The couple, married for 26 years, have become well-known around the globe for their roles in Tyler Perry’s film and stage work. BET has picked up eight hour long episodes of the show from Entertainment One. The Manns exec produce alongside Tara Long, Howie Miller, Kim McKoy, Roger Bobb and Phil Thornton.

The Viacom-owned cable network has also handed out series orders for a docu-series starring rapper Nelly, and a new entry with Keyshia Cole.

The untitled Nelly vehicle, meanwhile, will focus on the rapper navigating his hip-hop career, fashion businessman/co-owner of the NBA’s Charlotte Bobcats and father to his biological children and his late sister’s children, all while balancing a relationship with Miss Jackson, Floyd Mayweather Jr.’s ex-girlfriend. The eight hourlong episodes will, as BET says, offer viewers an all-access pass to Nelly’s life. Nelly will executive produce the Entertainment One series alongside Tara Long, John Morayniss, Howie Miller, David Shaye, Kim McKoy and Shanta Conic and co-executive producer J. Erving.

“These three shows are led by talent that our audience connects with but are also very different shows,” BET senior vp original programming Charlie Jordan Brookins tells The Hollywood Reporter. “We’re excited about these new shows. What BET does is give the audience what they’ve been looking for.”

The three additions join an unscripted roster that features long-running hit Sunday Best and scripted entries such as The Game, Being Mary Jane, Let’s Stay Together and Real Husbands of Hollywood.