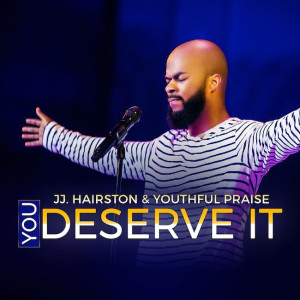 The dynamic gospel super group, J.J. Hairston & Youthful Praise, has earned its first GRAMMY® Award nomination for Best Gospel Performance/Song for the inspirational mega hit, “You Deserve It”, which hit the No. 1 spot on multiple Billboard music charts this year.

“This year has been filled with many great surprises, this one is truly an honor.” says Hairston who just returned from Santo Domingo, Dominican Republic where the group sang in front of over 80,000 screaming fans.

The soul-stirring song is the first radio single from the group’s latest album, “You Deserve It” (JamesTown Records/eOne), which debuted at No. 1 on Billboard’s Gospel Albums Sales Chart. It is also the first release under Hairston’s newly formed recording label, JamesTown Music. The group’s new radio single, “No Reason To Fear,” is rapidly climbing the Billboard Gospel Airplay Chart.

J.J. Hairston & Youthful Praise was formed in 1991 as a youth group at Turner’s Faith Temple (TFT) in Bridgeport, CT. They were originally known as Teens of TFT and served as the choir for the church that was pastored by Bishop J.C. White and Evangelist Gloria White. The group is known for their Top Ten gospel radio hits such as “After This,” “Resting On His Promises,” “Incredible God, Incredible Praise,” “Bless Me” “You’re Mighty.” Hairston has also launched a new syndicated radio show, Youthful Praise with JJ Hairston, on the Musical Soul Food Radio Network and he is finishing a book on marriage entitled, “Amazing Love,” with his wife, Trina, scheduled for publication in February 2018.