Retired Sheriff’s Deputy Ezra Harris gained national headlines after a You tube video of his mangled rendition of The Star Spangled Banner at a memorial service went viral and gained over 1.3 million You Tube views as “worst rendition of the national anthem ever.”

Producers of the #1 rated morning show decided to give the Chattanooga, TN resident a chance to redo the anthem during its “do over” week make-overs this past week. The staffers called in J.J. Hairston and country music star Dierks Bentley to individually coach Harris on how to sing the song and to memorize the lyrics. Standing in front of a colored guard with Hairston conducting and Youthful Praise backing him up, Harris delivered a much more satisfying performance this time. 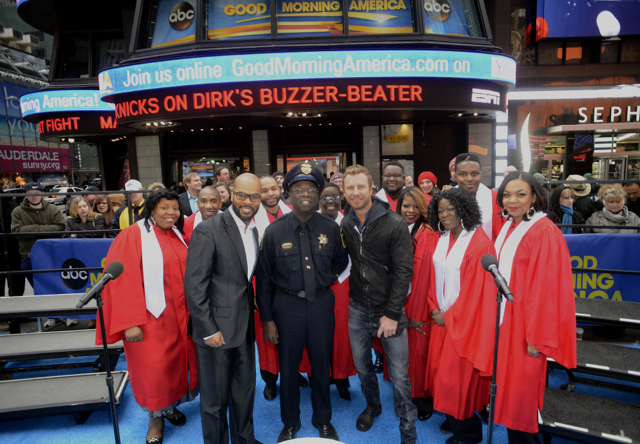 Hairston and his choir, affectionately known as YP, have been popping up in the media a lot lately. Members of the group recently performed with Miss Piggy on a Lady Gaga holiday TV special and Hairston will also perform on the upcoming primetime “Celebration of Gospel” BET TV special.

The dynamic choir’s energetic new radio single “Pushing Me” is slated to hit gospel radio formats this spring. Meanwhile, Hairston is putting the final touches on the group’s seventh CD “I See Victory” that is scheduled for release on August 5th.