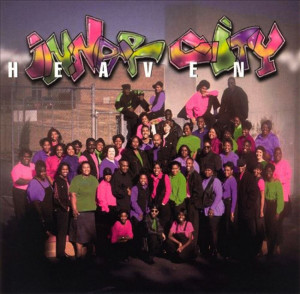 John P. Kee’s Grammy award nominated Inner City Mass Choir Mass Choir’s 1996 inaugural album “Heaven” recently made its 21st century debut on iTunes and other major Digital Service Providers (http://smarturl.it/th1upm). Fueled by the radio successes “God of Mercy” and “Where the Spirit of the Lord Is” the set was the first of two projects for the choir.

When “Heaven” was recorded twenty years ago the gospel music industry was a very different world from what it is now. Current gospel legends Kirk Franklin and Donald Lawrence were new kids on the block. Franklin had released his second big hit “Melodies From Heaven” and Lawrence had reached #1 for the first time with his “Bible Stories” album. BeBe & CeCe Winans had just disbanded to pursue solo careers while the band Commissioned’s Fred Hammond was finding his footing as a solo act with the radio smashes “No Weapon” and “When The Spirit of The Lord.”

It was within this musical context that the Crown Prince of Gospel John P. Kee – nicknamed as such because he took up the-then recently deceased King of Gospel Rev. James Cleveland’s throne of preserving the traditional black gospel choir sound – introduced the Inner City Mass Choir, a group of North Carolina teenagers.

At the time, Kee had announced his retirement from the music industry to concentrate on becoming pastor of a North Carolina church where he had begun an inner city outreach initiative. However, the retirement was short lived because of the success of his V.I.P. (Victory in Praise) choir’s surprise hit “Stand” in 1995. “The success of `Stand’ has got us back out there,” he told Billboard Magazine’s Lisa Collins at the time. “I had no idea it was going to do so well. Traditionally, VIP albums have not done well. `Stand’ just blew us away.”

In that season of creativity where Kee often produced up to four albums a year he eschewed using his VIP and New Life Community Choirs to record a new set of songs he had composed. Instead, he gathered a group of “street kids” and created the “Heaven” album that was a seamless fusion of traditional and contemporary choir music. It debuted at #15 on Billboard Magazine’s Gospel Albums sales chart in the fall of 1996 and remained on the chart though February of the next year. The choir’s final “Let’s Make It Better” album earned it a Grammy Award nomination for Best Gospel Choir or Chorus Album in 1999.

This project harkens back to a time when gospel choirs were gospel’s biggest stars. The week that “Heaven” originally charted, 25 of the albums on the Top 40 Gospel Albums chart were by choirs or ensembles. A recent sample of the current Top 50 Gospel Albums sales chart only displayed five choir projects and two of those were reissues from the 1990s. Fortunately, for choir lovers, everything old is new again.