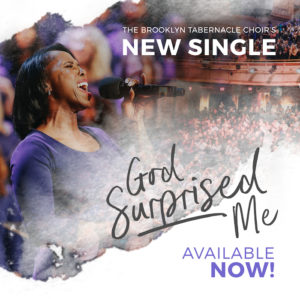 In anticipation of their April 6th album release, “I Am Reminded,” The Brooklyn Tabernacle Choir, has debuted a rousing new gospel radio single, “God Surprised Me.”

The rousing new proclamation is a fresh fusion of the popular 1990s-styled gospel choir sound intermixed with soulful horn lines and the aggregation’s legendary orchestral backdrop. Pam Pettway, who has done solos on various recordings for the choir over the last two decades, returns to lead this engaging tune with her smooth, melodious alto.

The 300-voiced troupe is in fine form and full voice on this timely message about God’s mercy and grace. Gospel radio is picking up on the song too. The track made Billboard Magazine’s Top 5 Most Added list at gospel radio for the week ending March 10th. “It’s a very good song,” says Jay Bryant, Program director of powerhouse gospel radio stations, WAGG 610 AM and 100.1 FM, in Birmingham, Alabama where the song is in the station’s Top Ten. He put the track into rotation the week he received it and it’s already spinning on fifteen of the 40 Billboard gospel chart panel stations.

“God Surprised Me” is now available for streaming and downloading on all of the major digital service providers: http://smarturl.it/IAmReminded

It’s also available for viewing below:

The ensemble is a blend of ethnic and economic backgrounds, with members ranging from lawyers and doctors to former addicts. Over the years, the choir has performed at venues such as Radio City Music Hall and Madison Square Garden. Their amazing legacy includes six Grammy® Awards, seven Dove Awards, three #1 Billboard charting albums and over four million albums sold. Visit http://www.brooklyntabernacle.org for more history.