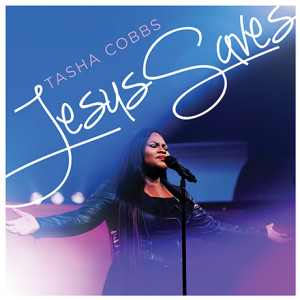 With a Grammy Award, three Dove Awards and three Stellar Gospel Music Awards under her belt after only one nationally released album, Cobbs encompasses everything that makes a Gospel artist influential and relevant both inside and outside the four walls of the church: purity of heart; a singular, God-focused passion for ministry; and an unwavering commitment to musical excellence.

Cobbs is a praise and worship leader whose debut album is at the top of the industry’s sales charts a stunning two years after its release. This is not something that happens every day, or every year for that matter. Tasha Cobbs is indeed an exception in Gospel music, and she proves this again on her self-penned, Vashawn Mitchell produced new single, “Jesus Saves.”

“One of the special things about the song is that you can’t repeat it over and over without it affecting your world and your emotions. The beginning of the song testifies about how He saved us and it brings you to a place of meditation on the things that God has saved you from,” says Cobbs. “I relate my own testimony of being freed from rejection and depression, because ‘Jesus Saves’…and there’s a place in the song where I say ‘he can save you from ‘that’ too…’ because, most of the time, when people think about salvation they think about that initial moment of accepting Christ, but throughout our entire lives we are being saved from so many things continuously.

“I’ve never written songs with a lot of words, but when God gave me ‘Jesus Saves’ He said ‘just say this over and over again.’” I love the song; it can be ministered anywhere – in your house, on your daily commute, or in a corporate setting with thousands of people as we saw at the recording. It really is that kind of hit-you-where-you-are ministering,” Cobbs adds about “Jesus Saves.”