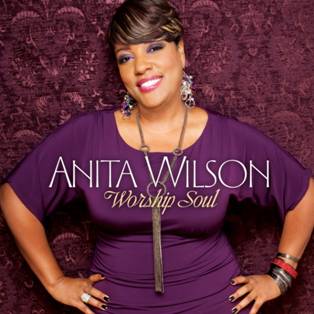 Anita Wilson is counting her blessings.  The success of her debut release, Worship Soul, is more than any new artist could hope for.  The Donald Lawrence & Co. singer launched out on her own with the EMI Gospel release of Worship Soul last April.  The soulful psalmist has now been recognized with music’s highest honor, a GRAMMY Award Nomination.  Wilson received a nomination for Worship Soul for Best Gospel Album of the Year.  To be televised on CBS, the 55th Annual GRAMMY Awards will be presented live from the Staples Center on Sunday, February 10, 2013.

Anita is ecstatic about the honor.  She exclaims,

“I am incredibly grateful that my debut project Worship Soul, has been nominated for a GRAMMY! How humbling to even be considered among such amazing artists who consistently inspire me! All glory to God!!!”

Since the release of Worship Soul, the lead single, “Speechless”, has been heard on almost every Gospel station in the country.  Not only does the stirring ballad flaunt the spectacular alto vocals of the songstress, but the lyrics easily wrap themselves around the heart of the God chaser.  The follow-up to the Billboard Top Ten smash, “Speechless,” is the rhythmic and energetic, “Jesus Will”, penned by Gospel’s own Rev. James Cleveland.  Both tracks have made the Gospel industry sit up and take notice of this gifted vocalist and songwriter.  Earlier in the year, Wilson was nominated for three 2013 Stellar Awards: Contemporary Female of the Year, Praise & Worship CD of the Year (for Worship Soul) and Urban Inspirational Single or Performance of the Year (for “Speechless”).

Many are familiar with Anita’s memorable vocals as a member of Donald Lawrence’s Company, specifically on the song, “Happy Being Me” from The Law of Confession CD. Prior to breaking out as a solo artist, her inimitable style put her in high demand as a background singer for gospel greats such as Hezekiah Walker, Marvin Sapp, DeWayne Woods and Vanessa Bell Armstrong.

Growing up in East St. Louis, the songstress began singing at the age of five.  A “PK”, preacher’s kid, Anita practically grew up between the pews of her father’s church.  As she developed her singing style, she merged gospel with jazz and R&B influences from artists such as Sarah Vaughn, Aretha Franklin and Stevie Wonder.  Taking the passion of worship and mixing it with a heart of soul, Anita Wilson has created a style all her own.

For more information about Anita Wilson, log on to www.msanitawilson.com.