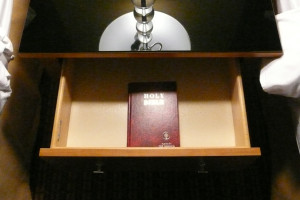 The U.K. nationwide hotel chain Travelodge has removed Bibles from all of its rooms, in a move criticized by the Church of England.

Bibles provided free by the Gideons have been taken away for “diversity” reasons.

The removals took place after refurbishment work across the hotel chain, which replaced the drawers where Bibles were being kept.

In response, a spokesman for the Church of England said:

“It seems both tragic and bizarre that hotels would remove the word of God for the sake of ergonomic design, economic incentive or a spurious definition of the word ‘diversity.’”

Writing on the Telegraph website, commentator Tim Stanley described Travelodge’s decision as “an act of cultural vandalism upon a tradition that goes back 126 years.”

A spokesman for Travelodge said:

“The reason is because of diversity. With the country being increasingly multicultural, we didn’t feel it was appropriate to just have the Bible.”

He added: “People were also taking Bibles away and with the redesign of the rooms, it was felt that it would be better to remove them.”

Travelodge is the only hotel chain in the country to have removed the Bibles, despite its never having  received a complaint from a guest.

Both Premier Inn and InterContinental Hotels, which owns the Holiday Inn chain, say that Bibles are being retained in their hotels.

A spokesman for Premier Inn said:

“On the rare occasion that a customer does not wish to have a Bible in their room, they can request this to be removed ahead of their stay.”

The practice of placing Bibles in hotel rooms dates back over 120 years, originating with the work of the Commercial Travellers’ Christian Association.

In recent times, the work of distributing Bibles in hotels has been taken up by The Gideons International, which provides this service to more than 190 countries worldwide.