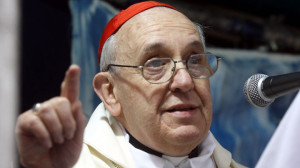 White smoke flowing out the chimney on the Sistine Chapel signalled that the new Pope had been selected.

Argentine Jorge Bergoglio has been elected pope, the first ever from the Americas and the first from outside Europe in more than a millennium. He chose the name Pope Francis.

After announcing “Habemus Papum” — ‘’We have a pope!”—a cardinal standing on the balcony of St. Peter’s Basilica on Wednesday revealed the identity of the new pontiff, using his Latin name.

Bergoglio had reportedly finished second in the 2005 conclave that produced Benedict XVI—who last month became the first pope to resign in 600 years.

The 76-year-old archbishop of Buenos Aires has spent nearly his entire career at home in Argentina, overseeing churches and shoe-leather priests.