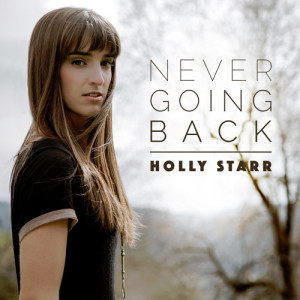 “Never Going Back,” the new single from acclaimed singer/songwriter Holly Starr, is available today on iTunes, AmazonMP3, GooglePlay, Spotify, The Overflow and most other digital download and streaming accounts. Co-written by Starr, Scott Cash and Ryan McAdoo, “Never Going Back” was produced by Ed and Scott Cash (Chris Tomlin, Kari Jobe).

“‘Never Going Back’ is a celebration song for all my brothers and sisters in Christ who have experienced the saving power of Jesus,” said Starr. “Salvation from sin and the ability to move on from our past comes through the blood and love of Jesus. To be forgiven and given grace like that is something I want to sing about until the day I die!”

Since her debut in 2008, Starr has become known for her thoughtful songwriting and accessible pop melodies. A native of Quincy, Washington, her previous Artist Garden Entertainment releases include Embraced (2008), Tapestry (2010) and Focus (2012). Videos of her hit singles “Don’t Have Love” and “Through My Father’s Eyes” have collectively garnered nearly 2 million YouTube views to date.