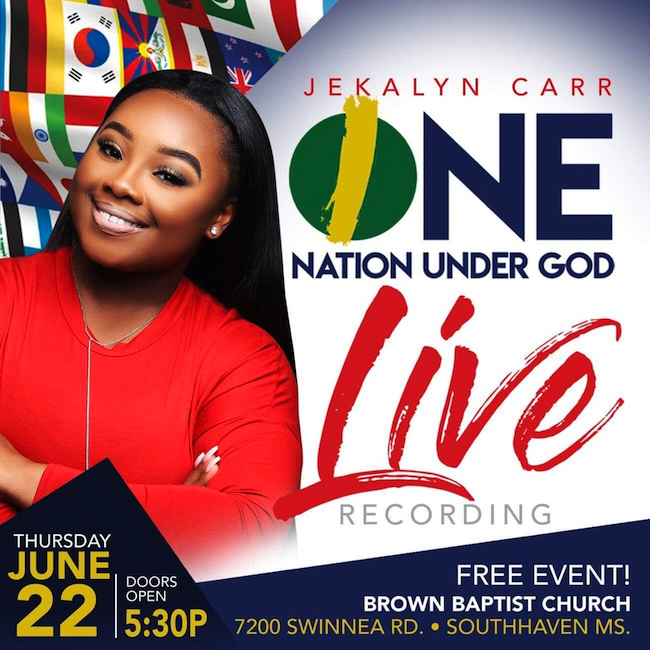 20 Year-Old GRAMMY®-nominated, Billboard Music Award Nominee and Chart-Topping independent recording artist, Jekalyn Carr, has been busy in the studio recording new music for her forthcoming fourth album, ONE NATION UNDER GOD, on her Lunjeal Music Group imprint and is set to finish recording a portion of her album LIVE!

The performance will take place Thursday, June 22nd at Brown Baptist Church, located at 7200 Swinnea Road in Southaven, Mississippi. Admission is FREE and doors open at 5:30pm and starts at 7pm.

ONE NATION UNDER GOD will be the follow-up to Jekalyn’s chart-topping third album, The Life Project (Lunjeal Music Group/eOne) that released in August 2016, and debuted at No. 1 on Billboard’s Top Gospel Albums chart and spawned her career-catapulting smash single “You’re Bigger.” The song spent four weeks at No. 1 on Billboard’s Gospel Airplay and Digital Gospel Songs Sales charts and was the 2nd Most Played Gospel Song in 2016 according to Billboard Magazines “Year-End” Gospel chart. The song also garnered cross-over success reaching No. 31 on Billboard’s Adult R&B Airplay chart.

Earlier this year, at the age of 19, Jekalyn earned her first-ever GRAMMY® nomination for “Best Gospel Song/Performance” (“You’re Bigger”) and joined an elite group of entertainers who have received a GRAMMY® nomination before the age of 20. The elite list of nominees in history of the prestigious award ceremony, includes Michael Jackson, Britney Spears, Justin Bieber, Leann Rimes, and Avril Lavigne to name a few. Additionally, Jekalyn also earned five Stellar Gospel Music Award nominations, including top honors: Artist of the Year, Song of the Year and Albertina Walker Female Vocalist of the Year.

Obtained from numerous measurements tracked by Billboard and its data partners based on album and digital songs sales, streaming, radio airplay, touring and social engagement, Jekalyn is currently nominated for her first-ever two 2017 Billboard Music Awards for Top Gospel Song (“You’re Bigger”) and Top Gospel Artist. The 2017 Billboard Music Awards will be held in Las Vegas on Sunday, May 21st, 2017, and air live on ABC at 8 pm EST / 5 pm PST.

This embryonic artist’s burgeoning national acclaim is evinced by the distinct honor of being named (over the last three years) to notable publications, Jet magazine’s “Top Ten Faces You Need To Know” list, Essence’s “15 Gospel Artists to Watch” list, Ebony Magazine Power 100 as one of the most influential people in the world along with Beyonce, Kanye West, Bishop T.D. Jakes and Lebron James to name a few and P. Diddy’s Revolt TV’s “16 New Faces in Gospel.”

While her musical accomplishments are impressive Jekalyn encompasses the right kind of substance in which great Gospel artists are made. She understands the dynamic and sacrifices she has to make for her ministry and platform, and she does them willingly, because her focus is on the greater good—impacting people. Her gift, passion, character, integrity, talent, and sacrifice is evident in everything she does.