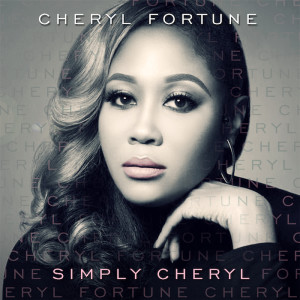 Grammy® Award nominated singer-songwriter, Cheryl Fortune, has made a solid showing with her stunning new debut album, Simply Cheryl (LuDawn Music/Tyscot), which bows at No. 8 on this week’s Billboard Gospel Albums sales chart. Preview and purchase album by clicking here.

The radio single, “Fighters,” has also ascended to the Top Ten, leaping from No. 11 last week to No. 9 on this week’s tabulation.

The twelve-track album is an R&B-flavored celebration of the rhythms that permeated urban airwaves in the late eighties and nineties. The set opens with the joyous dance cut “4 A Night” which could easily find a home within Jody Watley’s repertoire. “Nobody” boasts a New Jack Swing feel while “Don’t Apologize” is a stadium-styled anthem with a self-affirmation message.

The infectious “Figure It Out” echoes the electro-funk of the Zapp Band (vocoder included) while “Lost in the Crowd” shines with a futuristic Rock vibe. There are reflective, quiet tracks such as “Trust Is” and “The Walk.” Then, “Give It Up” glistens with a southern soul, Stax Records balladry that shows off Fortune’s exquisite vocal technique and chilling runs.

As a songwriter, Fortune is most noted for co-writing James Fortune & FIYA’s No. 1 hits “I Trust You,” “Still Able” and “Live Through It.” Her songs have also been recorded by gospel greats such as Shirley Caesar, Tasha Cobbs and Zacardi Cortez. She also co-wrote the Top 3 hit, “Hold On,” which features gospel great Fred Hammond and R&B singer, Monica.

Fortune was a member of the Grammy-nominated gospel act, James Fortune & FIYA, where she served as the group’s vocal arranger, backing vocalist and frequent songwriter from 2004 to 2014. Over the last two years, Fortune has toured on contemporary gospel music legend Kirk Franklin’s “20 Years In One Night” world tour as a background vocalist and a vocal director.