Words from the Publisher 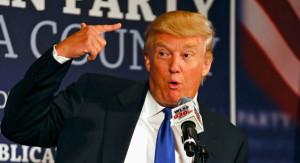 It’s amazing that Billionaire Donald Trump has got this far in the presidential race. With his brash talk, offensive comments, and sometimes arrogant behavior, polls show Trump as an early favorite to snag the Republican nomination.

The media has ate up the headlines Trump has created, riding it all the way to increased viewers and ratings.

In the process, Trump has managed to offend many Christians, and make others question his beliefs. Says Trump, “The Bible is my favorite book.”

When asked what his favorite bible verse was (In the video below) Trump dodged the question. Squirming for an answer, it appeared that Trump didn’t no one verse from memory.

At the the 2015 Family Leadership Summit moderator Frank Luntz asked Trump if he had ever sought forgiveness. “I’m not sure I have ever asked God’s forgiveness. I don’t bring God into that picture,” Trump said with a kind of shoulder shrug.

“When I go to church and when I drink my little wine and have my little cracker, I guess that is a form of forgiveness. I do that as often as I can because I feel cleansed. I say let’s go on and let’s make it right,” Trump added.

Now many Christians know and believe that the root of Christianity lies in the belief of Jesus Christ as the savior and the forgiver of sins. I applaud Trump for reading the bible and attending church, but if his pride won’t allow him to ask for forgiveness he’s missing out on what it truly means to be cleansed from sin.

“If we confess our sins, He is faithful and righteous to forgive us our sins and to cleanse us from all unrighteousness.” -1 John 1:9